Katti to katti, bara baje batti’. Kids, especially in Mumbai, could not have escaped this rhyme. Be it the local neighbourhood or school playground, it was too catchy to go unrecited. ‘Katti’ and ‘batti’ are terms indicative of the intent of affection towards a friend. Katti meant that it’s sour and declaring batti indicated all is well. An approximate translation of the rhyme in English would read ‘If sour be sour, come noon it be fine’. Relationships are that easy to manage for kids. Even in dour times, noon was the constant hour of hope. 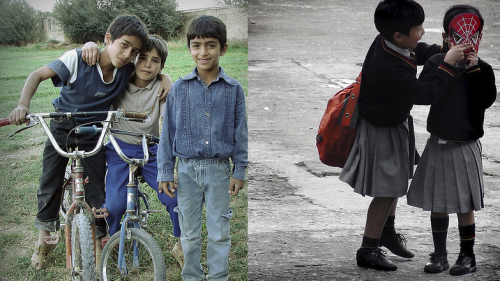 Growing up escalates complications proportionately. Perspectives change gradually. While as kids the purpose of tarred roads were for riding bicycle or playing cricket or marbles now it’s a means to reach some place. Home was a shelter, now it’s treated as a sanctuary. Trains and buses were fun on wheels, now it’s a choice topic for gripe. Objects are perceived in significantly derivative and segregated purposes then their original intent. This is apparent in the story of any urban neighbourhood with a worthwhile history.

Any urban centre which survived it’s use-by date captures many narratives. Most noticeable among them is the story told by human construction. A structure erected in a matter of days is inhabited overnight. The landscape looks inviting. Survival needs are replaced with leads to gratifications. When the neighbourhood falls out of favour with investors, ebb turns into a back-draft even faster. Inhabitants exit next and with them the energy that served as edifice as well as welcome mat. Each dilapidated neighbourhood is a contemporary exhibit of similar narrative pieces. What it also palpitates though is its status as the epicentre of broken relationships.

Any place that finds inhabitants in a jiffy also provides fertile grounds for encountering new relationships. Friendship, in many cases, is a mere eye contact away. The syntax and grammar of bonding is tweaked to accommodate the pace and space afforded. The burden of mutual expectations becomes vestigial by it’s cumbersomeness in this neo-settlement. The fact that settlements don’t find any settlers is a yet another modern day irony. It attracts permanent transients – itinerants.

Conceiving and nurturing a lifelong relationship is a soon-to-be endangered experience. The fragility of any relationship is evident in the socially accepted political correctness adopted by most. That speaking mutually agreeable words will suffice in proving an absence of prejudice is a dangerous mass delusion. Odds in favour of a slip whilst walking this tightrope is high. Surviving a fall may be assured but it’s scars will claim a few personality traits as scalps before it agrees to heal.

If the artificially contracting sense of space and time of an urban setting is responsible for dictating relationship patterns then on the other end of the spectrum the limitless concept of virtual space which the Internet provides is a playground for relationship forming on steroids. Individuals are befriended on established theories. Matchmaking algorithms connect personality traits instantly to incubate a new bond. New bonds are formed eagerly with little consideration on the needs to nourish them and challenges involved in surviving them. Growing evidence suggests a major ideological shift here. ‘Easy come, easy go’ is the mantra to live by.

If mantras were easy to adhere to, philosophers would be found on every corner. Easy go is rarely easily gone. Exit trails on either side linger and writhe around as the tail of a mortally wounded snake. If watching that is cringing then experiencing it is wringing. Pressures of living up to the ‘easy go’ part extracts it’s due in insomnia and paranoia. Sanity gets corroded. How much by, is a matter of frequency of easy goings and the centering of the person to his identity. Someone with an unhindered identity feels like a tennis ball in a Nadal-Djokovic game – absorbing shuttling bashes all the while desiring to cradle at the centre, by the feet of the umpire.

This trend is entrenching itself for a long haul. Newer generation breathes it and lives by it while elders are falling prey to it’s convenience with increasing incidents. For those consumed by the convenience of consuming at the flick of a switch, a push of a button or a turn of a knob, ‘free market’ is frantically groping for a relationship regulator. Pills to regulate after affects are a huge market in themselves now. Anti depressants, anti anxiety pills, sleeping aids, steroids are all jostling to wedge the expanding crevice. Flicking a few switches in the neural corridors or turning the knob on a few hormonal pipes, doing whatever is needed to stop the incessant bashing.

Meanwhile, as the practice of unfriending claims newer victims, all wait for that fairytale hour of hope.