Begging is the unique art of wringing another’s conscience (or patience) sufficiently enough to make it submit in substantial measure to one’s entreaties. The result one seeks could be either a few coins, a raise, a promotion or in the case of the two richest beggars of our times, the chance to form a club of the richest charitable donors in the world. Bill Gates and Warren Buffet made news prior to their visit to China with the much publicised objective to rope in some of the freshest members of the billionaire club to join them on their journey to immortality through their stage managed redistribution of concentrated wealth. They have made similar overtures towards the Indian millionaires as well. 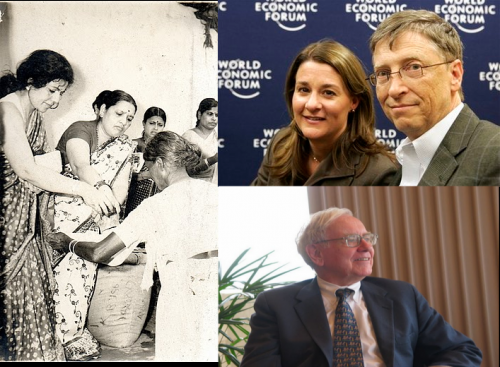 Societies in China and India have mirroring trajectories of the rags to riches cycle. Diverging only in the political chapters, the morals from tales in all other aspects of one society could just as easily be applied to the other. Begging in this part of the world, at least the destitutional kind, has a long and complex history. It is only natural that a society with surplus manpower, limited natural resources and a history of concentrated and hierarchical flow of wealth and power should find beggars weaved generously into it’s social fabric. Their survival relies mainly on the mercy shown by the ruling class while their quality of life is dictated by the collective conscience of their neighbourhood. For most parts, begging is a feature of cities and other pilgrimage towns or tourist destinations that creates a noticeable disparity between the haves and the have nots. As a result, everybody in this society imbibes the technique of dealing with beggars very early in their childhood by emulating their guardians and elders. With such an overwhelming pool of lower and middle class folks (nursing aspirations of joining the wealthy class) it is not surprising that most among them grow up with pragmatism as the driving force in dealing with beggars. Compassionate perspective is a rarity. For the working class who drone about their lives trying to fulfill their emotional inheritance of providing a better life for their immediate and extended families, beggars are usually viewed as the lazy bunch rather than the unfortunate ones.

This is not to say that these societies are bereft of genuine compassion towards the destitute. Gautam Buddha, Saibaba, Kabir and many other masters of the path to spiritualism have appealed successfully to this emotion. Lesser mortals still do, everyday on the streets all around India. Even now, the religious holidays and pilgrimage towns are responsible for some very brisk transference of wealth and emotions. With the governments of India and China clearly choosing capitalism through industrialization as the primary means of uplifting the poor, majority of the charitable activities are still a grass roots movement. Perceiving charity as a financial vehicle to reduce one’s tax liability has not caught on as much in China or India as it has in the society that nurtured Gates and Buffet.

Charity in the developed world has been institutionalized – in both senses of the word. Transference of wealth without any first-hand transference of emotion misses the forest for the trees. Small institutions with slightly larger pool of volunteers and even larger bank balances coupled with an effective PR machinery is the modern day avatar of a successful charitable organization. Governments have gladly welcomed entrepreneurs – offspring of the very culture of industrialization they promoted – to create and lobby for a parallel sphere of influence for the agitators of social causes. The political classes have a few distinct advantages in allowing this industry to flourish. Firstly, and most importantly, those firebrand agitators of social causes who are capable of whipping up a frenzy of emotions can pacify their unique sense of conscience by being allowed to operate outside of the political domain. Secondly, the wealthy donating class now has a refuge to create more wealth by expertly navigating the labyrinthine laws of taxation. Gaining the title of a noble benefactor in the process is just the cherry on top. Thirdly, the government can gradually reduce it’s most important social liabilities by offloading them to this industry. The rapid growth of this industry fuelled by such motives has succeeded in sucking out the most important aspect of charity, the transference of emotions. Any doubts? One just has to think if Gautam Budha, Saibaba or Kabir would accept charities via this industry.

There is no evidence to doubt that both Gates and Buffet are sincere in their efforts. Both have sombre personalities and they choose to conduct their personal and domestic affairs in the same vein. Neither are known for any extravagance; never desiring nor deriving happiness by means of flaunting their wealth. Some would even argue that they shun the image of a super-rich. These are all qualities many could do well to emulate. However, their approach to charity is a misguided one. First of all just mere transfer of wealth from the surplus-class to the supplicant-class is not real charity. This act is nothing more than trading of guilt, just like carbon trading transfers guilt in the green movement. If they succeed at this it won’t be surprising to find that Goldman Sachs has commoditized this as an over the counter product and very soon exchanges around the world has also standardized a platform for trading guilt. (I apologize; cynicism is difficult to avoid when discussing such matters).

The other matter of even greater significance is the affect their activities may have on the institution of democracy. Democracy is the best tool devised so far that empowers the deprived class to seek their share of the social wealth with dignity. Both Gates and Buffet, by choosing to operate in this alternate sector, are indirectly responsible for diluting the accountability of governments in all matters of the social upliftment. The larger the participation of private and voluntary resources in the charitable sector the more reason for government to offload it’s moral obligations to them. Subverting the established political channels of seeking social justice is not healthy for a functioning democracy in the long run.

Their efforts would be truly praiseworthy if they invested their wealth and conscience in repairing the political paths for seeking social justice. It is the only dignified means for uplifting oneself. At least when nirvana is not the eventual goal.