My first impression of Microsoft software was, well, green on black. The monitors then were monochromatic with a large blinking block for a cursor. Learning to transform this blinking block in to a blinking underscore was one of the first commands I looked up. Since then I had always admired Microsoft software and Bill Gates. Back then in Mumbai, the only readily accessible computers came with Microsoft DOS and many of us owe much of what we achieved later in life to Microsoft. Without access to desktop PC’s running Microsoft software, things would have been undoubtedly different now. The Windows 3.1 workgroup, Windows NT, 95 until Windows Vista had all succeeded in getting it’s hooks in me. However, in the recent versions of their software I noticed features which were only useful for newer untrained folks. Microsoft’s antipathy towards it’s veteran users in favour of courting newer ones has aggrieved many. The dreadful animated paper clip of Microsoft Office was as annoying as it was demeaning. I had had enough of Microsoft. Now I have mad my escape.

About 2 years ago, when I purchased my current laptop – a Tablet PC – Windows XP was not really an option. Vista had better integration of Tablet PC features. I opted for Vista knowing well the risks of the burden of an unpopular OS. Adopting a new system has it’s share of heartbreaks about features lost and frustrations about yet to be learned tweaks. Vista had it’s share…and more. But it’s even before Vista that I had begun planning my jump off of the burning ship of Microsoft. It happened after I moved past my days of developing software for Microsoft platforms to developing for the Java platform. 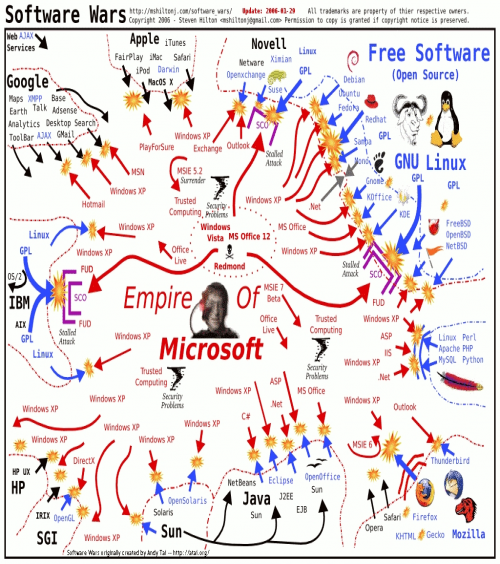 Software developers as a breed always had natural communal tendencies. Microsoft leveraged this well initially by distributing cheap tools for software development for it’s platform. Microsoft lenient view on piracy of it’s development tools was as significant a contribution in it’s rapid adoption as any. The BASIC program was one of it’s earliest successes. Since then, the Microsoft Visual Studio Development packs have continuously improved on it’s development tools, programming language features, etc. to attract newer developers. Microsoft also promoted the community’s ideas of shared development. That was until they acquired a market share which they were unwilling to relinquish to newer players who made themselves attractive by promising the very same things Microsoft had but got possessive after it’s success. The development tools available for Java are now well above par of what Microsoft provides. And most of them are absolutely free. In contrast, a single developer license for Microsoft Visual Studio costs around $2000! Microsoft’s abandonment of it’s most loyal franchise was the first clue that something was amiss.

Microsoft, ever since it’s success with 98 has coerced many hardware manufacturers into pushing it’s software onto unsuspecting customers. The US Department of Justice launched an investigation into Microsoft’s monopolistic designs and predatorial practices in wiping out competition which was eventually settled out of court. Microsoft’s licensing policies were more attuned to acquiring a customer than retaining a satisfied customer. It’s OEM license policy states that if the OS on a new hardware for any reason failed to function as promised then the customer was liable to purchase a fresh new license at almost twice the price of OEM license. Their pricing and licensing policies for Office suite of applications were equally outrageous.

Any company which does not value the loyalty of a group of people directly responsible for mass adoption of it’s technology is clearly misguided. A misguided giant is a dangerous giant. I chose to get out of it’s way.

It was with considerable relief that I switched to Ubuntu. Ubuntu too had it’s own share of induction issues but the community support has been dependable. Replacements for all my favourite Windows applications were easy to find. Except for a couple of applications which I depend on once or twice a month, my separation from Microsoft has been dispassionate and clean. I don’t know yet if Ubuntu is a long term choice or not but for the time being I’m relishing my long planned escape from Microsoft.