A delicacy among college kids not just for the bargain it is for a seemingly healthy dish but also for the extra dollops of the sacredly guarded tomato sauce (ketchup).

The cornerstone of this delight is bread slices whose edges have been cut precisely enough to shave off lumpy edges without any noticeable loss in it’s square area. This slice is then smeared with a paste of green chutney made out of corianders and chilly and some butter which is identifiable only by its creamy colour and slimy texture; never by the aroma or flavour.

This slice of bread is then decked with slices of vegetables that couldn’t have been any thinner even if they had been sliced using the best cold-cut slicer from any of the delicatessens in Manhattan. The slices, in no specific order, are onions, boiled and peeled potatoe, beetroot, cucumber and finally and most precious of them all, tomatoe. 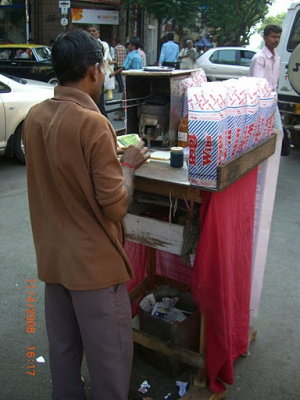 The tool of this trade is a hacksaw blade; very surely abused in servitude of its intended purpose which is quite evident from the spots of rust on it and the worn out embossing of the mark of its maker.

If you’re ever privileged to witness this miraculous slicing, it will re-kindle your interest in the mythical Kamdhenu which could allegedly provide for banquets from its pit-less udders. The vegetables never seem to undergo any transformation despite the fact that four slices were shaved off of it in front of your very eyes; unless that is; you happen to be among the very few to witness the vendor unearth an un-sliced kind and proceed to extend the purpose of its existence to the maximum.

Finally, this layer is topped by another slice of bread. This deck is cubed into six pieces and a not too generous racetrack-esque circle of tomatoe sauce squeezed on it. Obviously this supply of sauce needs replenishing for every sliced deck that disappears. This deck is served on a newspaper that is cut about an inch wider than the rectangle of the bread and finally on a plastic plate so that the only marks on the plate after the endeavor of production and consumption is the occasional splatter of tomato sauce and a healthy wipe of the ink from the print. Obviously the appeal of this dish is the relative quickness with which it is prepared, a chance at observing a master at work and the cheap and relatively healthy alternative to any other deep-fried snack.

Trust me, I’ve had it countless times.