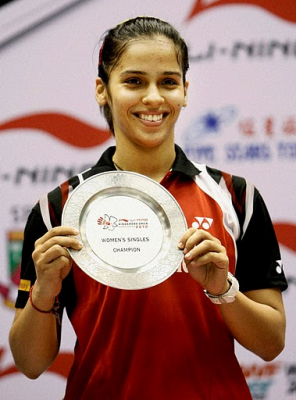 Saina’s statements were true to character of a 20 year old novice at public speaking, revealing the innocence of her age while simultaneously exhibiting the confidence from experience of having participated in events of much higher stature. Instead of choosing to use her comments as an opinion of an accomplished sports person the media, in it’s inimitably crass taste, decided to stoke it into a controversy. Almost immediately after the realization of her statements seeped in, Saina tendered a sincere apology saying:

I am sorry for whatever I said. I did not mean it. The Commonwealth Games will be a huge success.

Mercifully, the CWG officials kept their ego’s in check and declined to comment on the entire matter.

Hopefully the story will die prematurely. The media bosses will rue this lost opportunity. The CWG officials will heave a sigh of relief of having to deal with one less irritant. Saina can get back to her practice with sights set on medals.

If there is any lesson to be learnt in this it’s that the media is nobody’s bedfellow, no matter how warm and secure their cuddle might have felt in the past.