Shyamaprasad’s vision, and execution, of Sunil Gangopadhyay’s original novel (name not credited in movie) is a triumph in story telling on celluloid. A very complex yet simultaneously basic notion of personal choices that one consciously makes in the quest for one’s place and purpose in the universal consciousness is told in the most beautiful manner. 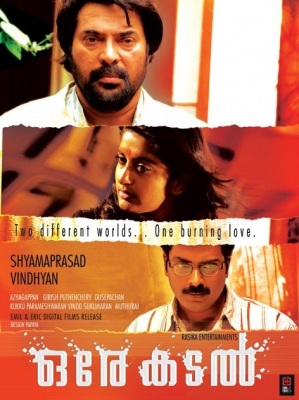 The narrative opens by revealing three characters who have already chosen their ways of life and are comfortable in their choices. Nathan, a successful economic philosopher with a trade in academia good enough to support his two other indulgences – fine liquor and female companionship. Deepti is an urban middle class housewife with a devoted and conscientious husband, committed to providing a secure domestic household for his family. Deepti is pretty and alluring in her innocence. Bela is Nathan’s female companion of choice. She owns and manages a pub which Nathan frequents.

Nathan has convinced himself that his purpose in life is best served without any emotional attachments which is painfully revealed through his emotional self-castration when his beloved cheriamma (aunt) passes away – abjuring all his obligations. Jay (Deepti’s husband) is jobless and Deepti’s vulnerability and dependence on a stranger (Nathan) when Jay is outstation on a job prospect and their son fall’s ill is how the tryst begins. Having been neighbours in the same building was never reason enough to acquaint until then. Nathan’s academic success and the arrogance he commands from it attracts Deepti initially. It is a mystery ( and all due credit to Shyamaprasad for desisting from resolving it) if Deepti’s circumstantial vulnerability or Nathan’s air of arrogance is what entwined them physically. What is clear though is Deepti’s attraction to Nathan as a more able and suitable companion as well as Nathan’s belligerent invocation of his doctrine of emotional detachment towards Deepti. Shyamaprasad has competently maneuvered around any anticipation of seduction in this tryst. There is none. Nathan’s professorial demeanour attracts Deepti and Deepti’s innocence and pupil-like adoration attracts Nathan. Both made an equal choice. 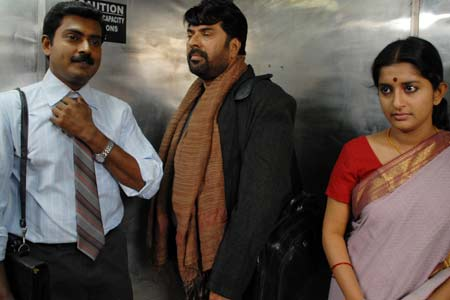 What follows is a story spanning 3 years, handled with the utmost dexterity. Nathan’s rejection of Deepti in favour if his accepted philosophy tears her apart emotionally. Her emotional turmoil through a brief phase is captured effectively. Her state of clinical insanity that follows seems inevitable without seeming neither contrived nor melodramatic. Jay is always supportive as the doting husband who is clueless about the true events responsible for his domestic upheaval.

Nathan is tormented by the turn of events. A family torn apart by a philosophy that denounces every virtue of family. His proximity to the unfolding tragedy snares him into the roller coaster ride. The emotionally unencumbered fortress protecting his self indulgent way of life now seems all too brittle. His attempts to placate Deepti’s emotions without offering any compromises on his end only aggravates her. Jay is the only constant throughout this narrative, continuing in all his obligations as a devoted husband and father. His faith in Deepti blinds him from suspecting anything and is poignantly revealed when he approaches Nathan to have a chat with Deepti, a humbling task for any husband. In some sense, Jay is the steady rock in this narrative. His faith in everything around him, once his employment woes are resolved early in the narrative, is comforting. Without him, the narrative could have easily spiraled into a vortex of tragic events.

Nathan is tormented by the state of Jay’s home. He is driven more towards drinks and female companionship is now a burden that is gladly forgotten. Bela disappears from most of this narrative only to reveal to Nathan in a later scene that he had been fooling himself onto an emotional island. She herself reveals her state in the world through he most poignant dialogue in this movie.

Loosing my son to starvation changed me. ‘This’ Bela was born then. It was the child who died of hunger who bore me.

The endgame from here on is the challenge that both the author as well as the director can take equal credit for. Although not a mystery, it would be a shame to reveal anything at the risk of diluting the experience of those who enjoy the anticipation of the next rather than the joy in the present. The closing shot is the signature of any great director. Shyamaprasad declares his style, scoring full marks in my books with what he does here.

This brings us to the rest of the talents involved. The editor, Vinod Sukumaran, does a fantastic job in pacing the narrative. There are hardly any questions left unanswered at each turn of events. Most of the film is shot on location and this maintains realism to a story set in contemporary times. Consumerism’s scars on the city, be it a giant neon sign for one brand or a giant billboard for another, is the visible backdrop from Nathan’s top floor apartment. The households of Deepti and Nathan are depicted faithfully. Jay and Deepti’s middle class house is complete with ubiquitous clothes hanging from clothes-line and other hanger ons. Window sills are used as storage shelves. Only the decor of Bela’s pub is incongruent with the rest of the movie and the only blemish on the Art Director. The wardrobe for all the actors is acutely true to each’s character and succeeds in showcasing yet another dimension of art in this endeavour. One could watch the entire movie all over again and just pay attention to the sets or costumes and yet be awed. The background score is both melodious and haunting. The edginess during the emotionally tumultuous phases of the movie are ably complemented and accentuated by sound.

The portrayal of all the characters in this movie is first rate. Deepti and Nathan are a touch bland in the opening scene but once they get the ball rolling they are truly in their elements. Child actors are very well handled by the director. All secondary characters are portrayed competently and look and play their parts faithfully.

A truly triumphant endeavour of movie making in Indian cinema.